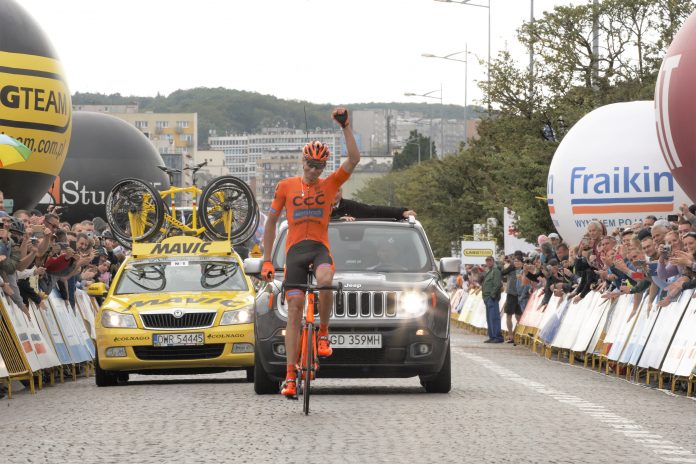 Adrian Kurek (CCC Sprandi Polkowice) managed to join the breakaway of the day, left his compatriots Marek Rutkiewicz and Emanuel Piaskowy in the last kilometres, and crossed the finish line solo!

Kurek`s victory is surprising because a bunch sprint was expected. This year`s route was favourable to one-day riders. The race consisted of two long laps in rugged terrain and four short laps in the city of a total distance of 260 km.

The breakaway of the day was formed shortly after a few kilometres were covered by the cyclists and included: Patryk Kostecki (Domin Sport), Mateusz Nowaczek (Voster Uniwheels), Emanuel Piaskowy (Team HUROM), Marek Rutkiewicz (Wibatech 7R Fuji) and Patryk Stosz (CCC Sprandi Polkowice). The main group did not intend to minimise the gap, and so these five riders gained 16-minute lead over the peleton.

During the first lap the commissaries were forced to stop the amateur race, which started just a few minutes after the elite riders race, in order to prevent the clash between these two groups of competing riders. It was a rather unusual situation as regards bike races.

The majority of the riders repeatedely tried to counter-attack, but only Adrian Kurek from the CCC Sprandi Polkowice team managed to pull it off. He put a lot of effort into closing the 16-minute gap and, after a few dozen kilometres, managed to join the breakaway of the day.

After finishing the 120 km of the race and an uphill climb in Nowy Dwór Wejherowski, Maciej Bodnar (BORA-hansgrohe) decided to make a counter-attack. ‘Bodi’ gained minute over the peleton, but a group of 15-riders, including the current Polish champion Rafał Majka (BORA-hansgrohe), caught up with him 120 km before the finish line. Unfortunately, Alan Banaszek (CCC Sprandi Polkowice), one of the favourites, was not among them. CCC Sprandi Polkowice`s leader was about thirty seconds behind the second group, so the ‘Orange Team’ tried their best to bring him back.

Their work paid off a few moments later. The gap between the breakaway and the peleton was successfully reduced to four minutes, resulting in a relief of tension. Artur Detko (Domin Sport) attacked from the peleton, but with no success. Then the pace dropped down again, but the the second group was very strong: Rafał Majka, Paweł Poljański, Maciej Bodnar (BORA-hansgrohe), Kamil Gradek (ONE Pro Cycling), Michał Podlaski (Voster), Adam Stachowiak (Voster), Paweł Cieślik (Elkov-Author), Paweł Franczak (Team HUROM), Łukasz Wiśniowski (Team Sky), Paweł Charucki, Artur Detko, Kamil Zieliński (Domin Sport), Michał Gołaś (Team Sky), Łukasz Owsian and Maciej Paterski (CCC Sprandi Polkowice). Before the first short lap the gap was still about four minutes , so it was aparent that the race would be decided on circuit course in Gdynia.

Just before the first crossing of the finish line the heavy rain started falling and the breakaway`s lead extended to five minutes. The rain made the chase very difficult and demanding. Around 35 km before the end of the race it was clear that one of the breakaway riders will be the new Polish road cycling champion.

The first one to become outsped by the breakaway was Kostecki, and on the second lap in Gdynia Stosz and Nowaczek suffered the same fate as he. Nowaczek gritted his teeth and joined the compatriots, but he was still about thirty seconds behind the leading trio – Rutkiewicz, Piaskowy and Kurek.

The last kilometres of the race resembled a game of chess – Adrian Kurek refused to set the tempo in the breakaway, and so Marek Rutkiewicz must have been dissatisfied with his tactics. Kurek attacked 5 km before the finish line and seized his opportunity: Rutkiewicz and Piaskowy were unable to follow him. Kurek crossed the finish line first, Marek Rutkiewicz was second (the same as last year) and Emanuel Piaskowy had to satisfy himself with the bronze medal.